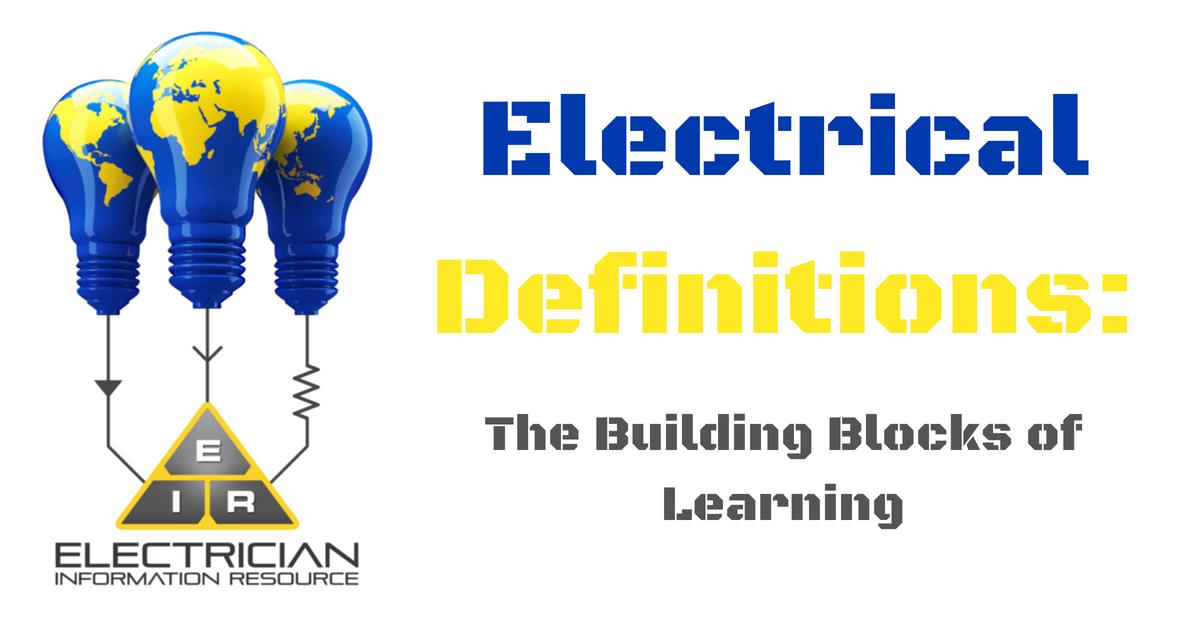 Here is a glossary of electrical definitions you will hear quite often during your career as an electrician. The linked definitions will take you to more in-depth information.

This is a device that measures (in amps) the amount of electricity passing through the meter to which it is connected.

Calories per centimetre squared (Cal/cm2)
This is referred to the amount of energy that can result from an electric arc flash. It is measured in cal/cm2.

Circuit
Electricity works by entering an appliance, passing through and coming out again. It needs to have a continuous flow without any breaks. This continuous flow is called a circuit. If there is any break in the circuit, the appliance won’t work because it won’t get the “juice” it needs to function.

Earth
In a residential wiring system, EARTH is the safety wire. In case something goes wrong with the unit you are working on, the earth will send the electricity to the ground instead of allowing it to pass through you. The earth wire is normally coated in a yellow with green stripe plastic cover. However, sometimes it does not have any type of coating, so be careful!

Electricity
Electricity is electrons moving through a conductor – in most cases a metal conductor. Electrons are the tiny particles spinning around the center (nucleus) of atoms.

Energy
Defined as the ability to do work. A unit of energy is referred to a joule and the symbol is J.

Fuse
Fuses are designed to prevent too much electricity from passing through the wires. Homes have a fuse for just about every electrical outlet and light socket. Some appliances, such as your stove, have their own set of fuses inside. One large fuse prevents too much electricity from entering the house and a circuit breaker cuts the power when an outlet is overloaded to prevent the fuse from burning out.

Generator
A generator can produce large amounts of electricity. They are used as backup systems in case of a power failure and in areas where electricity isn’t available.

Insulation
There are all types of materials through which electricity can pass – these are known as conductors. To prevent the electricity from passing through these materials, they are coated with insulation. Plastic is commonly used to insulate wires.

Joule
Joule is the unit of measurement used to measure energy.

Kilowatt
One thousand watts is one kilowatt.

Live
The live wire carries the electricity into a house and to everything in the house that uses electricity. To distinguish the live from the other wires it is coated in blown plastic. Older wiring systems might have the live covered with red plastic. The live wire is the most dangerous.

Neutral
The neutral wire completes the circuit and carries the power back to the station. The neutral wire in modern wiring configurations is covered with blue plastic, while in older systems it is usually black.

Parallel
Some electrical objects, like batteries, have terminals (+ red and – black). When all of the + terminals of more than one object are connected and all – terminals are connected, the objects are joined in parallel. The electricity passing in the circuit is split and part passes through each object.

Power
The rate of doing work. In electrical work the force is referred to as voltage, and the motion is the movement of electrons. Power is represented by the letter P and is measured in watts.

Resistor
The resistor is the part of the electrical circuit designed to reduce current flow.

Resistance
Resistance is any opposition posed by a circuit, substance or component to the flow of current.

Series
A series is several objects joined together in a loop, end to end. Electricity flows through the objects until it has completed the circuit.

Transistor
Invented in the 1950s, the transistor largely replaced the thermionic valve because it is much smaller, less expensive to produce and lasts a lot longer than the thermionic valve. Transistors are used in many electronic devices such as radios, televisions and computers.

Thermionic valve
This device increases electrical currents. It is used mostly in amplifiers to increase the volume.

Triode
This is a special type of thermionic valve with three active electrodes.

Unit
Electricity used in the home is measured in units. Your utility bill is calculated by the number of units that have been used during a billing cycle. One unit is consumed when one kilowatt of electricity is in use for one hour.

Voltage
Voltage is a unit for measuring electricity. It measures the force of the electricity moving through the wires – the more voltage, the larger the force. This is what makes high voltage so dangerous.

Voltmeter
The voltmeter measures the force applied or the voltage used to move the electricity through a circuit. The voltage is measured in volts.

Volt
This is the unit of measurement used to measure voltage.

Watt
This is the unit of measurement used to measure power.