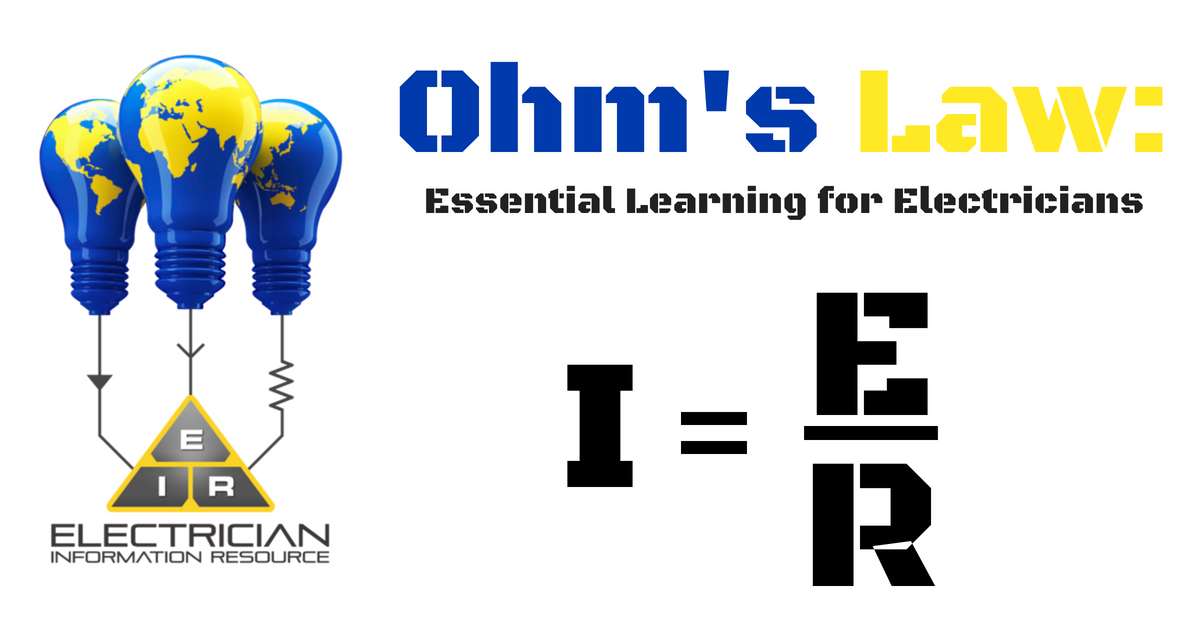 You can't learn about electricity without learning about Ohm's Law.

Named after Georg Ohm, a German physicist, the law was first published in a treatise in 1827. It states that the current flowing between points through a conductor is directly proportional to the potential difference across these points.

The resistance is the constant of the proportionality. Ohm's Law is described by this mathematical equation:

This means that Ohm’s law says that R in this relation is constant and does not rely on the current or voltage.

Ohm's Law Is The Relationship Between Voltage, Current and Resistance

The driving force behind the flow is called the voltage. The voltage is a precise measurement of how much potential energy exists between two points in order to move the electrons. Without the two points as a reference, the term “voltage” loses its meaning.

Free electrons usually move through conductors with some degree of opposition to motion or friction. This friction is called resistance.

How much current flows through a circuit depends on how much voltage is available to motivate the electrons and how much resistance there is in the circuit to oppose the flow of electrons.

Like voltage, resistance is the relative quantity between two points. This is why voltage and resistance quantities are often said to be “between” or “across” two points in a circuit.

In order to understand circuit quantities, you need to be able to describe the quantities as measurements, much the same as temperature, mass, length, volume or any other types of physical quantities. These are the standard measurement units for electrical currents, voltage and resistance:

The symbol is the alphabetical letter assigned to represent the quantity in algebra equations. Physics and engineering calculations commonly use internationally recognized letters of the alphabet to represent certain elements or units.

How to Measure Voltage

In the treatise, Ohm described how to measure voltage and current flowing through simple electrical circuits made up of wires of various lengths.

His representation to explain the results of his experiments was a more complex equation than the one above. The above equation is the modern form of Ohm’s law.

The term Ohm's law is also used in physics where it refers to a number of variations of the original equation created by Ohm. This is the simplest example:

Here J is the density of the current in a particular location on a resistive material, the E represents the electric field at the location, and σ represents the conductivity. This version of Ohm’s law was developed by Gustav Kirchhoff, also a German physicist.

The symbols representing quantities are always written in capital letters, except when the quantity describes a brief instance.

For example, an electric battery has a stable voltage and would therefore be symbolized by a capital E. The voltage at the moment lightning strikes a power line would probably be symbolized using a small letter e or v, to indicate that the value was recorded in a brief instance.

When you begin learning about electricity, you will probably be taught about another foundational unit used to measure electricity – the coulomb. However, this measurement is rarely used in practice. The coulomb measures the electric charge directly proportional to the number of electrons in an imbalanced state.

When you are working as an electrician, some common terms you will hear will be ohms, amps, volts, currents and circuits.

All of these terms and their meanings may seem overwhelming at first, but after a while they will be second nature. You will be able to take your multimeter and instantly understand what the readings mean.

To recap – Ohm's law states that the current flowing between points through a conductor is directly proportional to the potential difference across these points.

That wraps up this article, head over to the electrical theory page for more information.